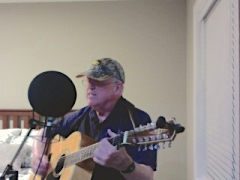 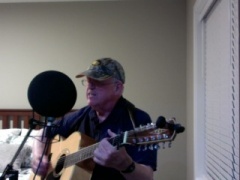 I love my Lord, wife, family, music, computers & making pizza, mostly, but not always, in that order.

I especially like to make favorite jokes into songs and write parodies.

I have a wife, (retired public health nurse) three grown sons, one granddaughter and one grandson. Number one son (married to Aya) is a project manager for Nokia in Japan. Number two son is a wizard at sonobe origami and has written a book and published several youtube videos on origami. Son number three is the reason some of you might recognize my last name. He worked for Zman Games and his name graces the cover of "Star Wars Imperial Assault." and the "World of Warcraft" board game, "The Litch King." His name is also on the cover of one of the Descent extensions. (Fantasy Flight Games) he has also written 5 ebooks. I have read "The Legend of Ivan" 12 times!

I have never played the street, though I would like to try sometime. I've mostly played at churches and nursing homes. There was this one wild time at this home...

The most interesting performance was a group I was with that opened for Monroe Crossing. They were awesome!

I was playing with a Christian folk group when a string on the guitar broke and thwacked our soprano. Boy, did she holler.

Ah! The Sears Silvertone! Strung by the Cyclone Fencing Company! Got it for Christmas when I was 15. Wanted to smash it to pieces after 15 minutes. The strings and the fret board were in different zip codes. But it did give me calluses to chew on when school classes got boring. One day it jumped (or was pushed) from a stage and I replaced it with a Yahama 12 string.

Mostly now, I sing to arrangements from BIAB ported over to Garage Band. Gotta have that full sound!