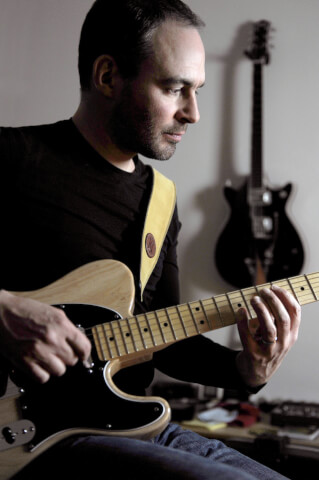 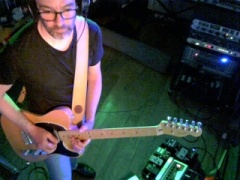 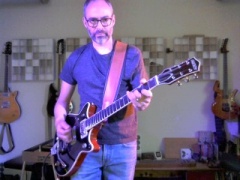 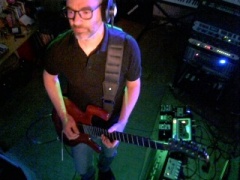 For most of my life, I have been too frightened to perform on the streets. Although last summer, I even went to the trouble of hauling my pedal steel guitar and a battery amp across town to do some busking. I am naturally shy. So in my youth, I used to paint my face a paler shade of white, put on a white top hat and went out there with my acoustic guitar, busking my fingers off in those crowded, noisy small town streets (we don't do big cities here), hoping that nobody would recognize me. And luckily, nobody did! - Only very few people actually stopped to listen. One guy and a girl stood there for quite a while. After the second song or so, they drew near, not to drop a coin into my guitar case, but to show their impressive badges: "Police. - You can't play on this particular street corner at this particular time of day for more than fifteen minutes."
Switzerland. - It's a nice country, but we do have a lot of rules here.

In 2004, I did a small tour through Switzerland and the UK. One of the gigs was at the Klinker Club in London, which was quite well-known for improvised music, which I thought I was doing more or less accurately. The Swiss Cultural Fund in Britain was even financing the UK branch of my tour, and a distinguished lady from the board was awaiting me, sitting in front of a pint at a table in that North London pub whose back room used to be the Klinker. The lady was obviously shocked, not only by the landlord's appearance (the guy was wearing a cauliflower-shaped potholder glove for a hat); the show was featuring one local artist screaming his lungs off, myself and finally one more local performer of whom I only remember her making fun of me because I didn't have a CD out yet, but only those hand-copied MiniDiscs. So after my show she announced to the scarce audience: "Philipp is selling his mini dicks." No wonder the lady from the board thought this was a complete waste of Swiss Franks...

I used to play the violin when I was a kid, because the director of the Bern Conservatory of Music claimed that my hands and the guitar were no perfect match. Anyway: vibrating strings making chainsaw noises appear to have struck a chord within the very heart of me. After eleven years of fiddling around with a bow to not much avail, I left my violin teacher and enrolled at the Swiss Jazz School. A few years earlier, I had dug out my great grandmother's guitar in the attic and started writing songs. I got my first electric guitar when I was thirteen, and one of my most memorable performances took place one year later, at the Berne Old Town Summer Festival, including my band and no trace of that aforementioned shyness yet. I sold that guitar for a song, but luckily to a friend who still has got it and swears I could buy it back for the same money any time I wanted. But in the meantime, being a Swiss guitar teacher has made me a rich man, so I got myself ten guitars, and he can keep it.