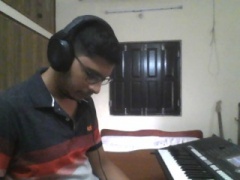 Moira, Bardez, Goa, India
India
Genres
StreetJelly Stats
Member since:
Last show:
Number of shows: 1
Total viewers: 0
Fan favorites:
Remove Ads
More About Jason Quadros
Jason Quadros started playing tunes from the Church and nursery rhymes on the keyboard since the age of six. He soon began playing in his Church and also in local bands.. In 2006. He was awarded the Hannam Clarke Award for securing the highest marks in the World (outside UK) for his 8th Grade Keyboard exam of Trinity College London.

Jason has always been passionate about music, especially improvised music. He is quite well versed in many styles like Rock, Jazz, Country, Funk, Blues, Classical. He loves composing and arranging for various projects and albums. He plays keyboard, Piano and Guitar. He has performed at many venues and hotels across India. .

Jason is an enthusiastic Music teacher who has been teaching for the last 12 years. He is an active member of the âStuti Chorale Ensembleâ as a tenor singer and occassionaly conducts too. He performs with the Band "Still Waters" that performs Jazz, Funk, Blues and Latin American music.