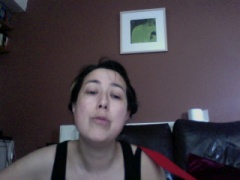 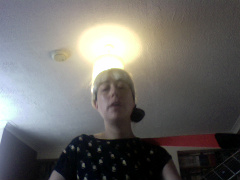 Played in a Manchester band called Valerie (comedy-core riot grrrl & pound shop pop band) who totally rocked but was the shy one. This was around the 90's+ which was awesome. We released an EP via switchfliker records and had a few songs on compilations. Also did a stint in librarian-esque band "The Booklovers."

My music has mellowed out since the band days (I didn't sing in the band) but I've been told I have a folk/country style voice. Also that my material is quirky.

I miss being in a band but still write my own material & tinker with a few covers. It's taken a long time for me get over the nerves, maybe they never go away.

I love hearing other musicians and I love singing and playing.

Hope you enjoy it too.

I haven't been brave enough to do this yet so am interested in other people's stories. My songs are quite short so I'd have to get a lot of songs in there for it not to bore the peeps or where ever I strum my geetar.

Just been doing a few Open Mics to get over the scaredy cat phase.

I'm just "Dory" me. We had a gig in London so got the train from Manchester. It wasn't until we got there I realized I'd left my guitar at home. Thankfully I was able to borrow one which was better than mine anyway so double thanks.

My guitar is my guitar, sorry guitar, not only do I not play you to your full potential, you remain the nameless one. Will call you "G".