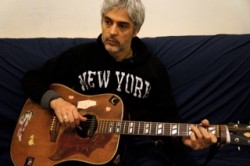 Inspired by different sound colors and musical shapes, the final content is always a pursuit for an inner truth and a desire to enlighten others with his music.

Remyâs fourth release: The Art of Change, takes us to the stars, with his eclectic Indie-Folk-Rock sound. His song âTwilightâ, (title track from the new EP), has become a favorite from audiences, and radio stations all over the U.S. Remy is currently working on an upcoming CD: â3 Cows Past Midnightâ, out soon!

Remy de Laroque born in Paris is a French American singer-songwriter. He was signed to the French label Carrere, with the band Dyva. They released the single Motel in France which received positive acclaim. He then traveled to New York.

He has been playing at New York city venues such as: The Living Room, Rockwood Music Hall, and the Bitter End. A sound reminiscent of Wilco, Ray Lamontagne and Dave Matthews.

I was taking the train to got to a show and I met this women
who seemed ecstatic. She started telling me that she just left
her abusive husband and was going to start studying in school.
She gave me a dollar and a huge smile, wished me good luck
with my show and stepped into the train.

It was a few years ago and this dollar bill is still stuck on my guitar
as a good luck charm.

Please check: reverberation.com/remydelaroque
Go to my profile and download my songs for free!