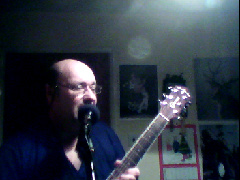 Brampton, Cumbria
United Kingdom
Genres
StreetJelly Stats
Member since:
Last show:
Number of shows: 46
Total viewers: 364
Fan favorites: 5
Remove Ads
More About Mykyndryd
My name is: Michael Round
I've had guitars from about 1973 and have heard so much good music that has influenced my styles and playing from: The Rolling Stones and Led Zeppelin to Robert Johnson and all the great Blues players.

Last year, I was fortunate enough to play on the Blues Jam circuit in London with some great players and that has inspired me to start creating a solo act called "Blues-House" incorporating some great Blues covers and a few original songs too.

When I'm not playing Blues, I create relaxing classical style music and also appear on many of David Joel Carter's tracks over on mp3unsigned.com

I enjoy the Blues and hope you will enjoy sharing some of these songs.